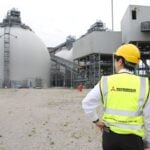 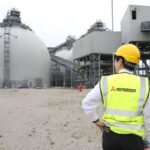 Drax aims to deploy the MHI technology at its biomass-fired power plant near Selby, North Yorkshire.

The company the technology could enable the power station to reach carbon negative emissions.

That means that with the help of the technology Drax would remove more carbon dioxide from the atmosphere than is emitted from its operations.

The company has already converted its station to use sustainable biomass instead of coal, in a move that is forecast to reduce the plant’s emissions by 85%, the company said.

Drax claims the use of bioenergy with carbon capture and storage (BECCS) technology will help the company become carbon-negative by 2030.

Will Gardiner, Drax Group Chief Executive Officer, said: “This game-changing contract between Drax and MHI could contribute to a decade of global environmental leadership from the UK and provide further stimulus to a post-Covid economic recovery.

“Carbon capture technologies like BECCS are going to be absolutely vital in the fight against the climate crisis.”